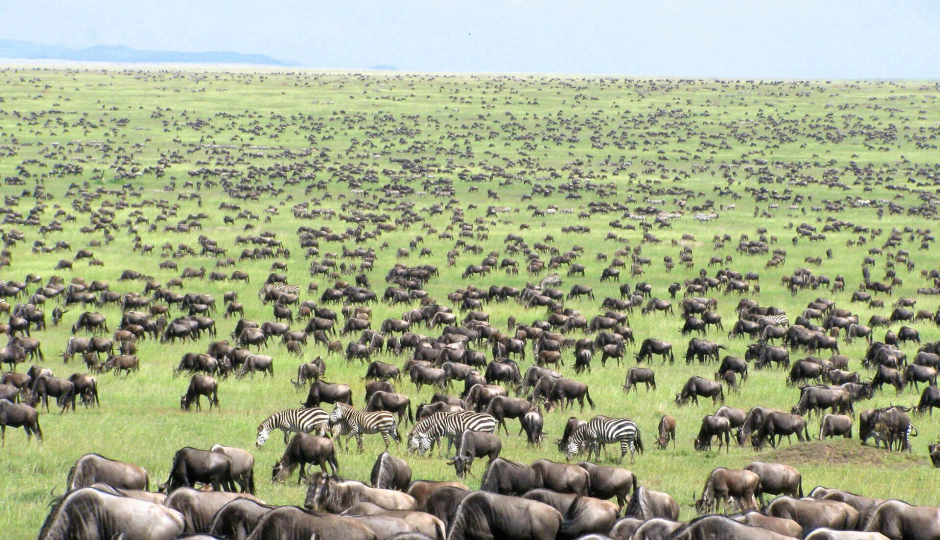 Wildebeest Migration Program
The annual wildebeest migration of herds in northern Tanzania and Kenya is one of the world's most spectacular wildlife events. Often referred to as the 'Greatest Show on Earth, The Great Wildebeest Migration is a movement of approximately two to two and a half million wildebeest, zebra, and gazelle throughout the Serengeti and Masai Mara ecosystems. Maps and illustrations showing the path of the migrating herds should be used as a general guide and a good way to choose the location of your hotel, camp or lodge. However, as with anything in nature, the actual day-to-day pattern is unpredictable. Wildebeest are remarkably unpredictable!

If your wish is to safari at the heart of The Great Wildebeest Migration, it is advisable to book one of Serengeti's famous mobile camps. Two in particular set themselves apart from the others for their commitment to keeping up with the herds - Nomad Tanzania's Serengeti Safari Camp and & Beyond's Serengeti Under Canvas. These are the two mobile operations that we consider truly mobile and will be located near or amongst the herds at any time of the year. There are then the mobile camps of Alex Walker's Serian and Asilia's Olakira which offer superb mobile operations from July to November and also from December through to March. For the rest of the year, these two fabulous camps are closed.

If going mobile is a little too adventurous for you, then choosing one of the Serengeti's permanent lodges is the best way to have all the comfort you need and also a good location for the herds on your Juhudi Expedition Ltd. Below is an overview of the movement of the herds, where we also give the names of the best permanent lodges to stay in during that time of year.

A general guide to the Wildebeest migration

Wildebeest Migration – River crossings:
The most dramatic feature of the migration that people wish to see are the river crossings; these commonly occur in June and early July on the Grumeti river and then August-October on the Mara River; it is very hard to witness this with a regular safari program, you will have plenty of people that want to see it; but it should be clear that in order to have a high chance to see this phenomenon then we have to stay with them in remote areas of the Serengeti for a longer period then usual, 3-4 nights in one location at the least, and the accommodation options there are both limited and expensive although getting more options in those areas nowadays

Wildebeest Migration – The Calving Season:
During the End of January and up to about the end of February; the Female Wildebeest herds drop their calves on the Serengeti plains; this is probably the most dramatic time to visit the short grass plains, but again few locations are good to witness this phenomenon, and they fill well in advance; to witness this phenomenon we again recommend a minimum of 3 nights in one location.

Below are general guidelines, for each season; but for a serious request that wishes to witness the migration in force we need to see how we build a special program including more than one location!

So in an ideal year, the following would be the general guidelines if you want to have good wildlife watching in the Serengeti with reasonable chances to see the migration.

December – April
The southern Serengeti, short grass plains (both Serengeti National Park and Ngorongoro Conservation area, and the Piaya area outside the Serengeti); the main draw is the calving season that ideally occurs at the end of January and up to about the 3rd week of February, but game viewing to April is stunning.

Lodges: Ndutu Lodge
Tented camps: Kusini camp, Masek camp.
Camping in the southern Serengeti areas; here also there is the west-east axis which means that no lodge can guarantee the migration and best to split the stay, which we do for migration programs like in the north.

May:
Herds move north and west and fill the Moru Kopjes area and the western wilderness zones.

June-July:
Herds move north to the western corridor and then onwards through Grumeti reserves to the northern Serengeti.
During this period and usually around the end of June or early July the herds cross the Grumeti river.
Tented camps: Mbalageti Tented lodge, Kirawira Tented Camp, Grumeti River Camp, Soroi Tented camp, Grumeti reserves.
Semi-permanent tented camps that move into the area for that time: EMC, Serengeti Under Canvas.

Camping in the Grumeti River area

Wildebeest Migration in August – October:
Herds move north to Northern Serengeti during this time the whole north is good, but the herds move fast after rain between Mara and Serengeti and the northeast outside the parks (Klein’s area) but always a large part of the herds is inside the Serengeti NP. The Zebra herds move south earlier and reach Seronera by mid – October usually.

In this period the herds cross the Mara River multiple times from south to north and from north to south,
Tented camps: Sayari Camp, Serengeti Bush tops, Olakira camp.
Camping in the Mara River area.

November – December:
Herds move south on the eastern border of the park to Piaya and from there cross into the park, usually, they spread throughout the whole area.
During this time the center and the east are good, but the herds move fast after rains.
Lodges: Klein’s camp, Mbuzi Mawe. But all the central valley lodges are also good during this time Sopa, Serena, etc.
Camping on the eastern side here is the most varied, and we need to make very late decisions as to the locations due to the fluidity of the herds at this time. 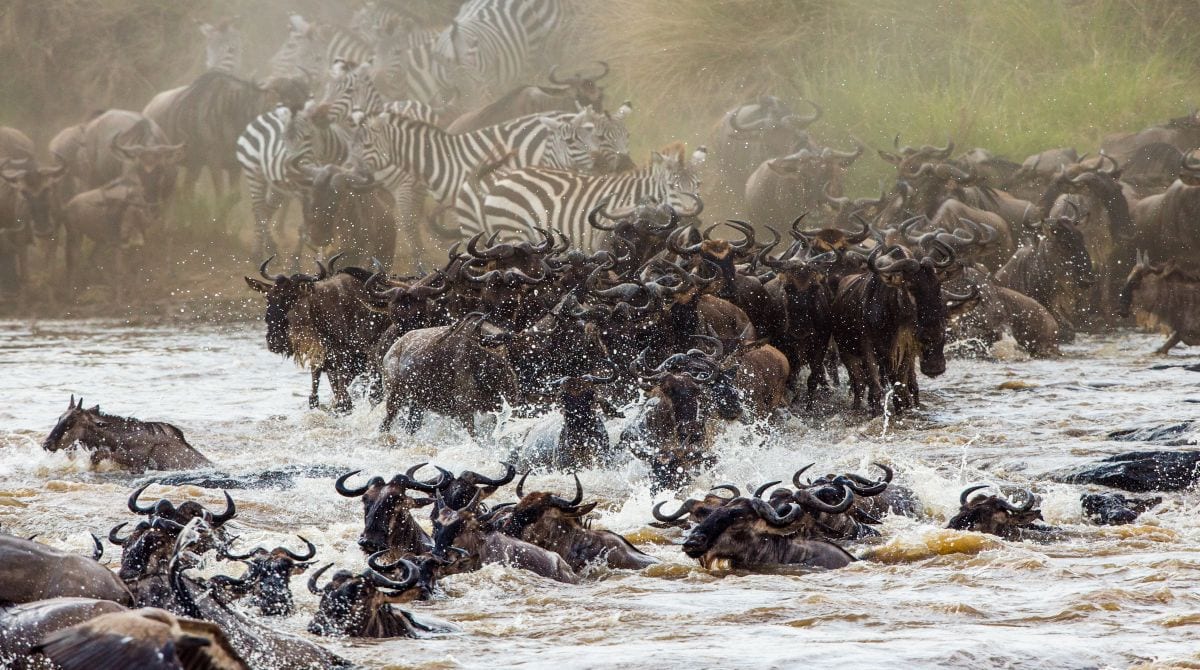 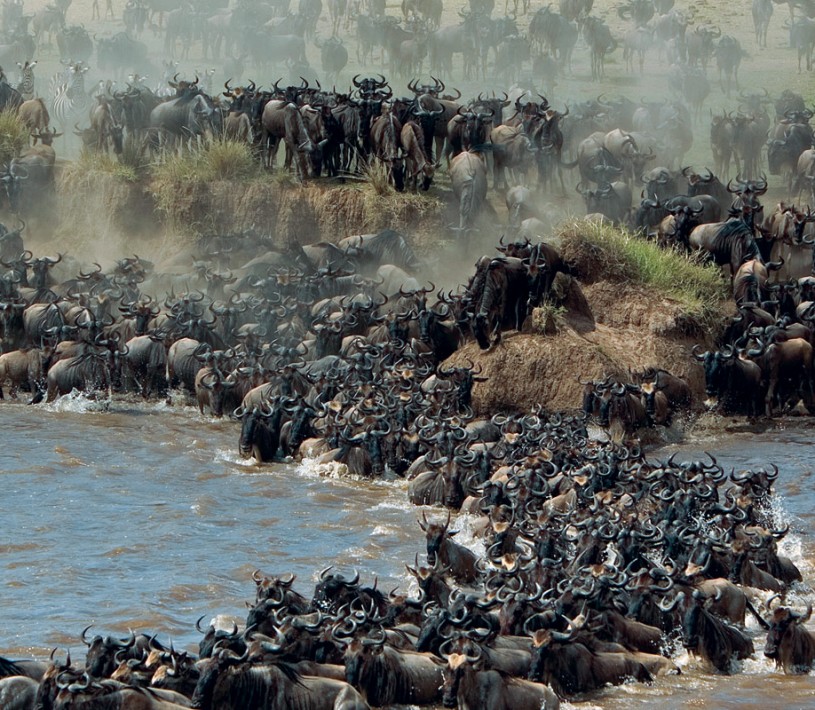 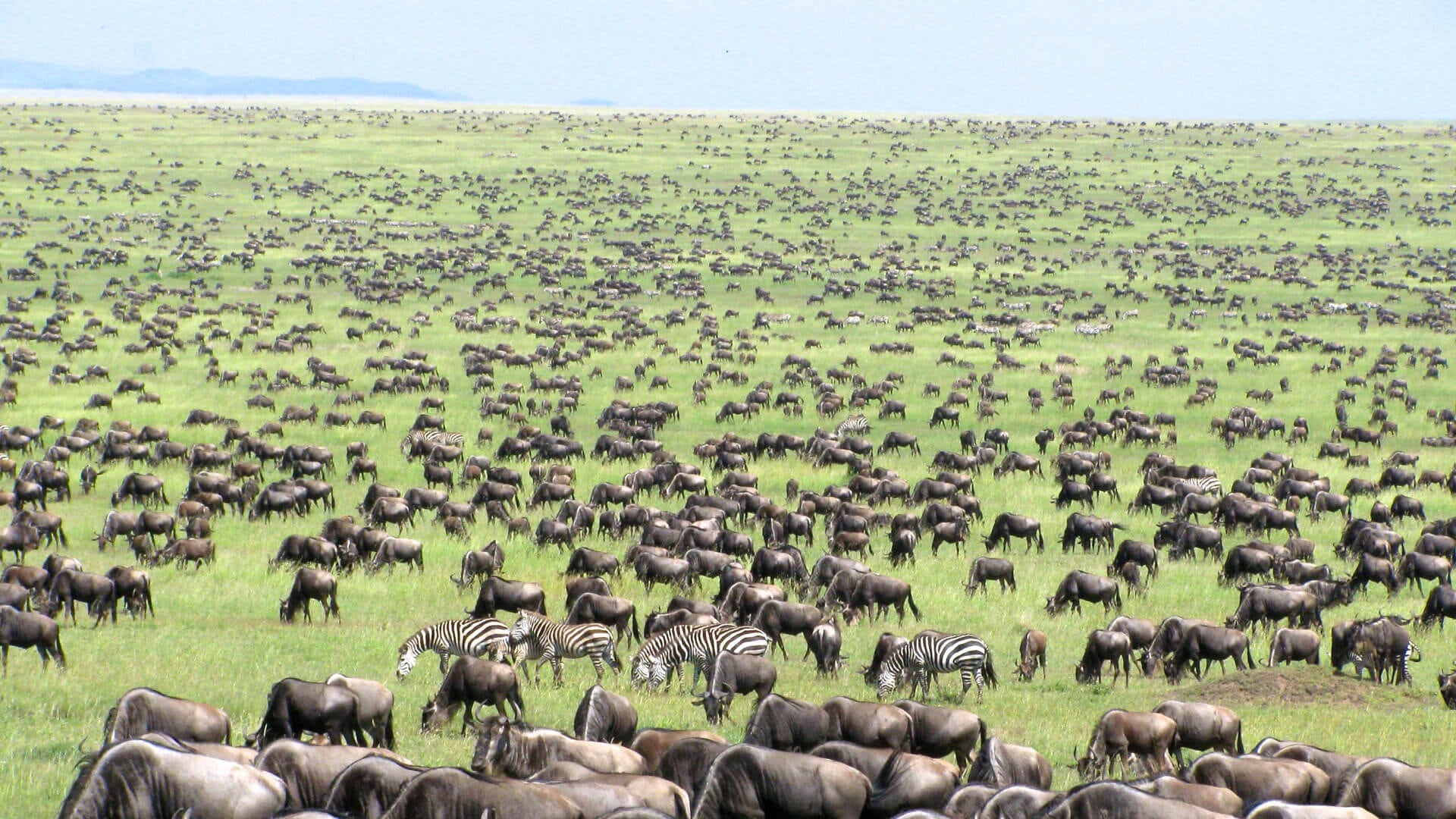 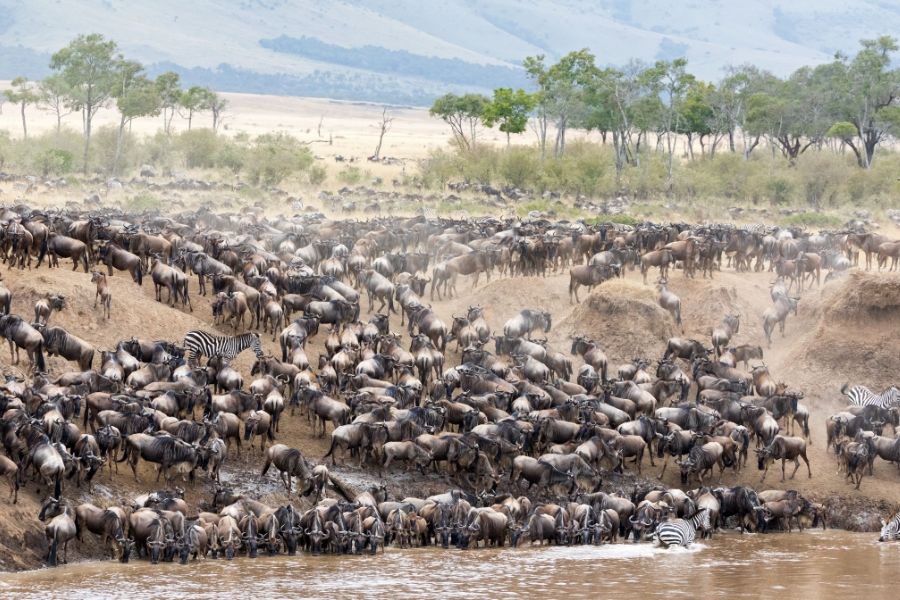